On Tuesday, April 19, I was on the way to the airport in Zurich and although I had been taking part of some General Assemblies in Switzerland, the expectations of a European Meeting were a little higher. This because it was my very first one to attend and it was in Rome, a city I have never visited before. On the airport in Rome I have met up with 2 Alumnis, Suzy Waterschoot and An Van Den Eede from Belgium, which I din’t know before. In the taxi on the way to the hotel, we have been talking already as if we would have known each other for years. Good start into the Pre EAM, so I was even more excited to meet up with many more old and new UWP people.

On Wednesday we had an early wake up and we left the hotel for St. Peter Square where we met up with Leonardo Guarnieri (E86) part of the organizing team and the tour guide you can only dream of. Because of his job, working at the city of Rome and being a man that knows all of Rome’s history, we got to sit in the very front seats on St. Peter Square, from where we had a great overview. The weather was beautiful, blue sky, 27 degrees and the best for some people to get their first sunburn this year. The 266th Audience of Pope Francis was a very special experience where also Up with people as a group had been mentioned. Then after lunch we visited the Vatican museum as well as the Sixtine Chapelle.

Thursday was Ostia Antica on the schedule where again Leonardo with the rich history of this former harbor city, has brought us back into the very old times, 7th year before Christ. In the evening I took part of a cooking class with a famous Italian TV cook Renato Bernardi, father of Giacomo, who is currently travelling in Cast A2016. In a small but very cosy apartment the 14 of us got the real Italian taste of pasta all’amatriciana, cheese, great wine and a delicious Tiramisu.

Friday morning was the moment to get an idea of what live as a Papal Swiss Guard is like. We had a tour of where they store their weapons and heard about what it takes to get into the smallest military guard in the world. After this also very interesting visit we took another walk thru the city, starting from St. Peters square over to Capitol Hill. It was not easy for Leonardo to keep his 100 Uppie sheep’s in one spot, but he did just great.

Saturday after breakfast the official Alumni Meeting took place at Hotel Villa Aurelia. Our new Regional Representative for Europe/Middle East and Africa, Jerko Bozikovic from Belgium run a full of interesting, info loaded meeting. The different represented countries with alumni clubs got the chance of giving us their (3 minute) updates of what has happened in 2015 and what their plans are for this year. A special guest was Brad Bungum (E82), Vice President of Up with People, Managing Director of Up with People Europe. Together with Kristina T’Seyen, Admissions Manager of UWP Europe, we got another bunch of information on what’s going on in Europe. There are new projects like doing Admissions with UWP students that just have gotten off the road, by going into schools talking about their experience and this on a paid base.

The visit of Cast A2016 in June in Brussels, also being the very last city of the tour, looks still like a challenge for the organizing team but they are convinced that it will turn out positive for everybody.

The last city highlight was scheduled for the afternoon, the Colosseum. An incredible sight where gladiators have fought for their lives and entertained the people of Rome. Well where could have been a better place to take an EAM group picture as well as singing A Song of Peace together until the rain had stopped us immediately. Hungry and tired we arrived at our hotel NH Villa Carpegna but a great dinner buffet had awaited us all. The evening ended up with singing songs with Alexander Flohr on the piano and lots of great singers and dancers.

Sunday morning we spent together with a nice brunch at the hotel following the presentation of the EAM organizing team for next year which takes place in Amsterdam. Then for most of us it was time to get our luggage, say Goodbye and leave to the airport.

Well folks I can say that my expectations have been toped in every way and I like to thank the whole ColossEAM team for an awesome time in Rome. See you at the next EAM 2017 in Amsterdam. 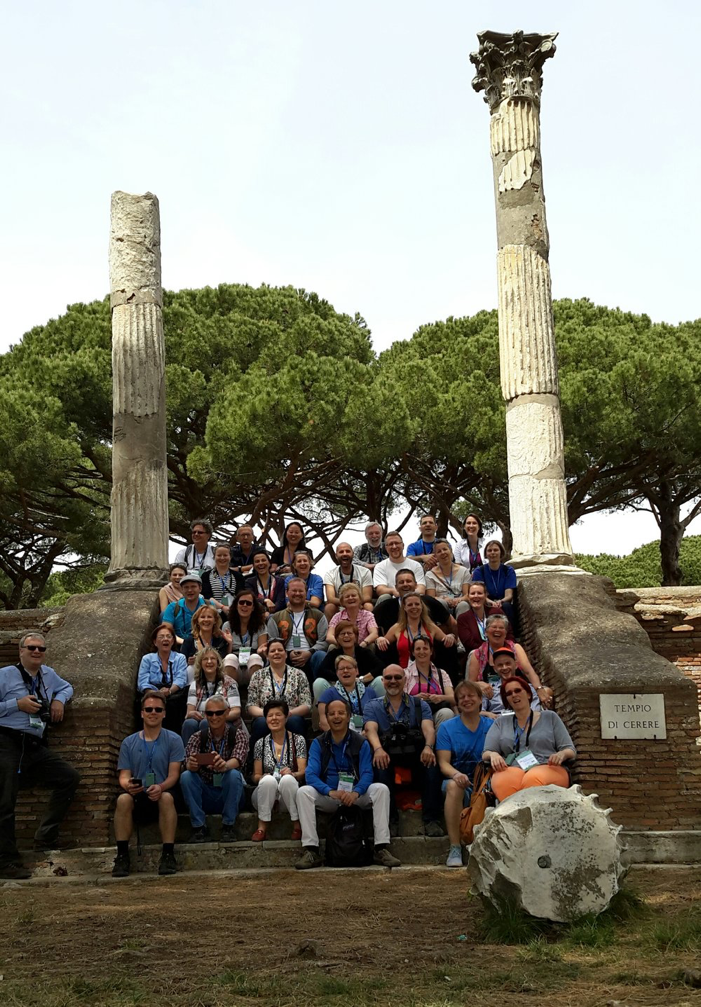